On a grey winter's morning, just a couple of days after Christmas, our latest tour of Japan took us to Hiroshima. Hiroshima was completely out of the way, far from most of our familiar Kanto-area haunts--although it did give us an excuse to visit nearby Itsukushima Shrine and Miyajima Island--but something drew me to the city. Hiroshima is an important part of 20th century world history, not only for Japanese but Americans as well; given the chance, I knew I had to visit and see it for myself.

On August 6, 1945--70 years ago today--the U.S. dropped the first of two atomic bombs on Japan, with the second dropped on Nagasaki on August 9. The first bomb was detonated around 600 meters (or, a little more than a third of a mile) midair above Shima Hospital, not far from the Hiroshima Prefecture Industrial Promotion Hall.

The Industrial Promotion Hall, now commonly known as the A-Bomb Dome, was the only structure in the area still standing after the bomb blast, and today can be seen as it appeared in the aftermath of the explosion. The scaffolding surrounding the structure, as seen above, is temporary: maintenance is held every few years to keep what's left of the building standing. Rather than repairing and restoring the building to its former state, officials felt it important to keep the ruins preserved so that people today may still observe the effects of the bomb. It is now a UNESCO World Heritage Site. 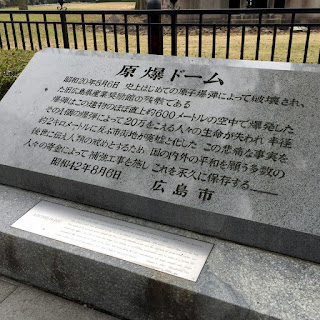 As the plaque in front of the A-Bomb Dome explains, over 200,000 people were killed by the bomb's blast and fires, and a 2 kilometer (roughly 1.25 mile) radius of the city area was reduced to ash. The plaque doesn't mention the thousands more who were injured or who struggled with long-lasting aftereffects of exposure to the radiation. As someone who has never witnessed war firsthand on her home turf and who doesn't come from a military family, it can be convenient for me to think about wartime casualties only in terms of soldiers on the front lines--soldiers who take up their country's cause, knowingly putting their lives on the line to fight for their beliefs and way of life. But in Hiroshima, as during other wars, many of the wartime casualties were civilians going about their daily lives on that August morning. Prior to the bomb dropping, Hiroshima's population numbered about 350,000. To lose half of a city's population in a single attack is almost unfathomable.

As we walked through the Peace Park, we met one of the survivors of the bombing, a group of people referred to in Japanese as hibakusha (被爆者, literally "explosion-affected people"). She spends many of her days in the park talking to visitors and collecting signatures for her petition calling for a worldwide nuclear weapons ban. When she saw that we listed our home country as the United States, she excitedly said, "Oh, Americans!" and offered us cranes she had folded, thanking us in earnest for visiting the city and the park. Naturally, I was crying--as I still do when I think about our visit to the Peace Park--and she did her best to cheer me up, and made me smile. She was genuinely glad to have met us, and we her.

Visiting the Peace Park as an American was an emotional and difficult thing to do. Although neither I nor my family had no direct hand in the horrors that Hiroshima endured, I still felt a tremendous amount of guilt. I know some older Americans who still harbor negative feelings toward the Japanese (as well as some not-so-old ones), so I felt that we would be met with at least a little animosity when people found out we were Americans--or at the very least would be distant toward us due to our obvious Western appearance. I was surprised and comforted to learn that the opposite was true. A tenacious, uplifting spirit permeates the city, and its citizens are warm and welcoming.

Today, Hiroshima is a thriving city of around one million people. They have a professional baseball team, the Hiroshima Toyo Carp (whose logo resembles my favorite MLB team's, so I had to buy a hat!), and they're known for their delicious Hiroshima-style okonomiyaki (leaps and bounds superior to Kansai-style okonomiyaki, in this humble foodie's opinion).


Although the city has rebuilt and recovered, many of the bomb survivors living in Hiroshima and elsewhere are still faced with daily struggles. Very few nursing homes exist solely to provide specialized care for hibakusha, and the waiting lists to live in such places are years long. In a recent survey conducted by NHK World, many hibakusha reported that they aren't able to share their wartime experiences with others, some citing apathy and disinterest among younger people. The harsh reality of the situation is that in a few decades, no one in the world will remember experiencing the events of World War II firsthand, and all we will have left are monuments, photos, videos, and survivors' stories. I hope that Japan--as well as the rest of the world--recognizes that the hibakusha and their stories are an important part of our modern world history, and takes steps to properly honor and care for them in their final years.

As a world citizen, you too can do your part: if you're ever in Japan, make sure to visit Hiroshima and the Peace Memorial. Give the Bell of Peace a ring, and let its low, soothing din resonate through you and to the far reaches of the park. Hiroshima is an important part of our world's cultural heritage, and the lessons learned there should never be forgotten. As it's inscribed on the plaque in front of the Peace Bell: "Let all nuclear arms and wars be gone, and the nations live in true peace!"
Posted by merimeaux at 2:01 PM No comments: